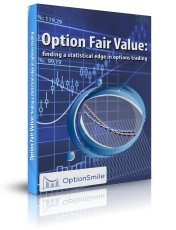 All three indices finished the last week almost unchanged, again.  Overall, they remain almost in the middle of the range formed in recent months. RSI(14) is still hovering around 50 mark showing neither oversold nor overbought condition.

Meanwhile, the option pricing picture has changed somewhat. Especially in the near-term expirations where prices of put options have moved closer to their Fair Values and made them priced almost fairly (for SPY and IWM).

Overall, options market seems to calm down and is coming to normal. The same force has driven the call prices down making them mostly underpriced.

Interesting opportunities remain in QQQ where puts are still substantially overpriced and calls are underpriced (bullish risk reversal strategy). Among SPY options, the only opportunity remains is selling puts with farther expirations (20-25 trading DTE). IWM has just opened an opportunity for calls buying.

END_OF_DOCUMENT_TOKEN_TO_BE_REPLACED

All three indices finished the last week almost unchanged. They tried to continue their short-term uptrends started from the strong support levels reached in the beginning of February and April but this attempt has been interrupted in the last half of the week. Overall, they remain in the middle of the range formed in recent months.

No substantial changes in options mispricing occurred since the last Snapshot (April, 16): call options are priced fairly except for QQQ, puts are mostly overpriced as usual.

Mispricing summary for the options with 2-5 weeks to expiration:

END_OF_DOCUMENT_TOKEN_TO_BE_REPLACED

All major equity indices have recovered from the recent correction and bounced back from their support levels. Neither oversold nor overbought condition is observed as RSI(14) is hovering around 50 level. Volatility gets back to normal, the markets are overall normalizing.

Option market priced have moved closer to their Fair Values (puts are less overpriced, calls are valued mostly fairly) except for QQQ where mispricing remains substantial.

Mispricing summary for options with 2-5 weeks to expiration:

END_OF_DOCUMENT_TOKEN_TO_BE_REPLACED
© Copyright 2017 OptionSmile. All rights reserved. Terms of Service and Privacy Policy.
The information provided on this Website is for informational purposes only and should not be considered as an investment advice. It is not intended to replace consultation with a qualified financial professional. Investing in options involves risk of potential loss exceeding the whole amount of money invested. No one should make any investment decision without first consulting his or her own financial advisor and conducting his or her own research and due diligence.