SPY and QQQ have been fluctuating in narrow ranges near their local highs. IWM has broken up the resistance level of its recent highs and continued its short-term uptrend entering the overbought territory. Volatility indices have been staying at their lows since January.

Major opportunities are observed mostly in short puts and long calls on SPY. IWM long puts and short calls (both ATM) can be considered as a directional play for those who expect a downward correction.

To make our estimation more reliable, we filter the historical data and select from the past only those dates when the market resembled the current condition (read more here). We use three filters:

For SPY and QQQ, we apply auto filtering for Volatility index and RSI selecting 300 days in history with the shortest Euclidean distance to their current values. For IWM, we use manual filtering since the current regime is not typical due to the relatively low implied volatility (RVX index).

For each underlying, we select expirations on a range of 2-5 weeks and present options Fair Values and Market Prices, both historical (red line) and current real-time (green line). The market prices of these two types can sometimes diverge from each other if the current market condition (volatility surface) differs from its average state in the history.

SPY has been fluctuating around the recent local highs in the narrow range; RSI(14) is above 60 level demonstrating slightly oversold condition. 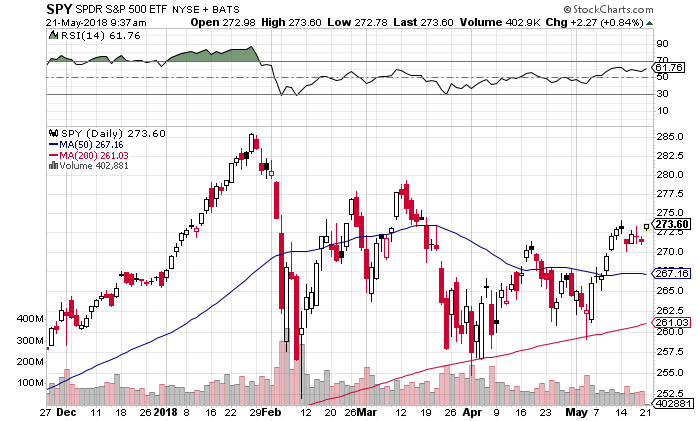 VIX stayed near its lows since January this year, reflecting the quiet market conditions:

Puts are overpriced, calls are underpriced but both not significantly: 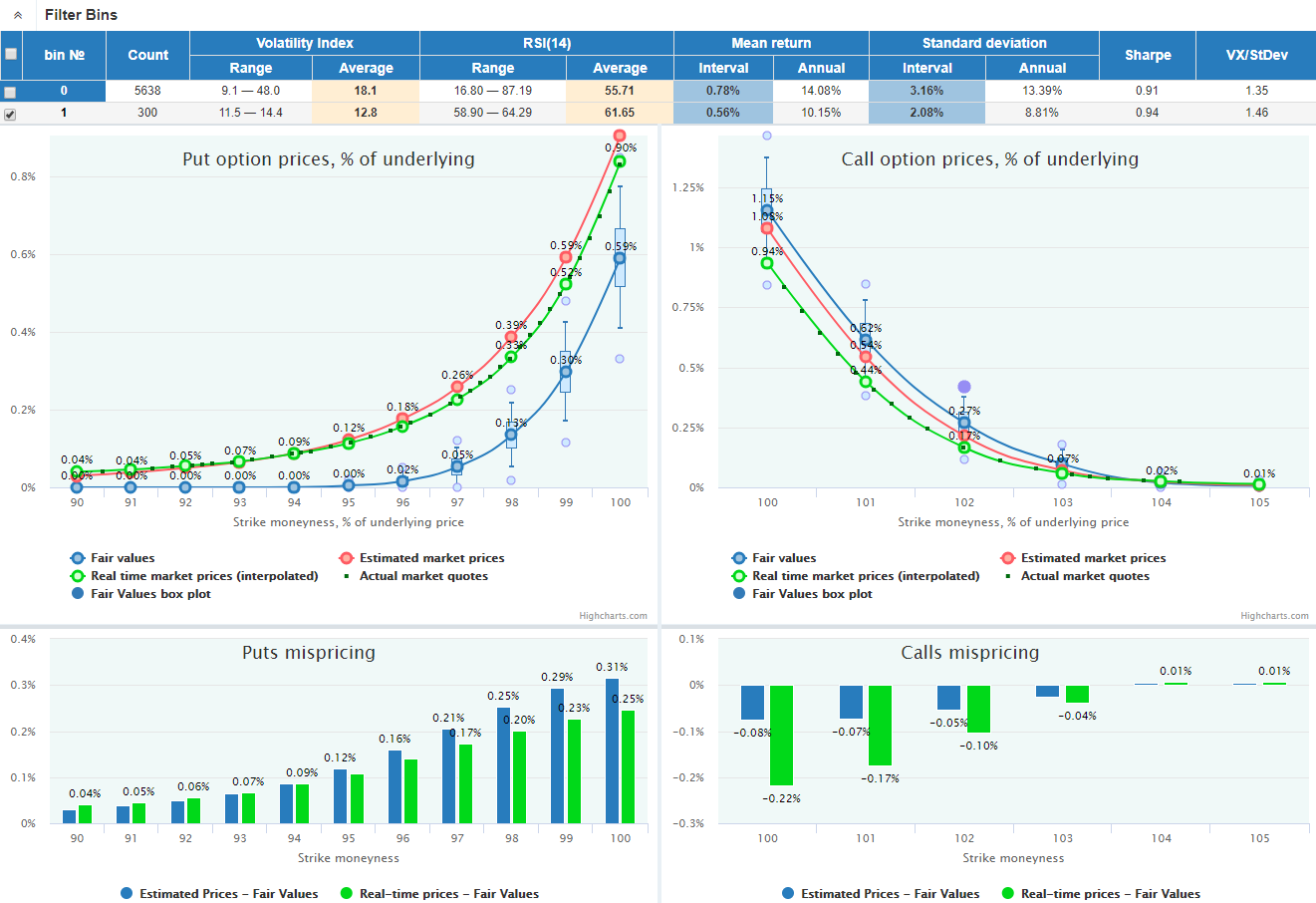 Puts are substantially overpriced; calls are underpriced: Market prices are adjusted for the June 15 dividend 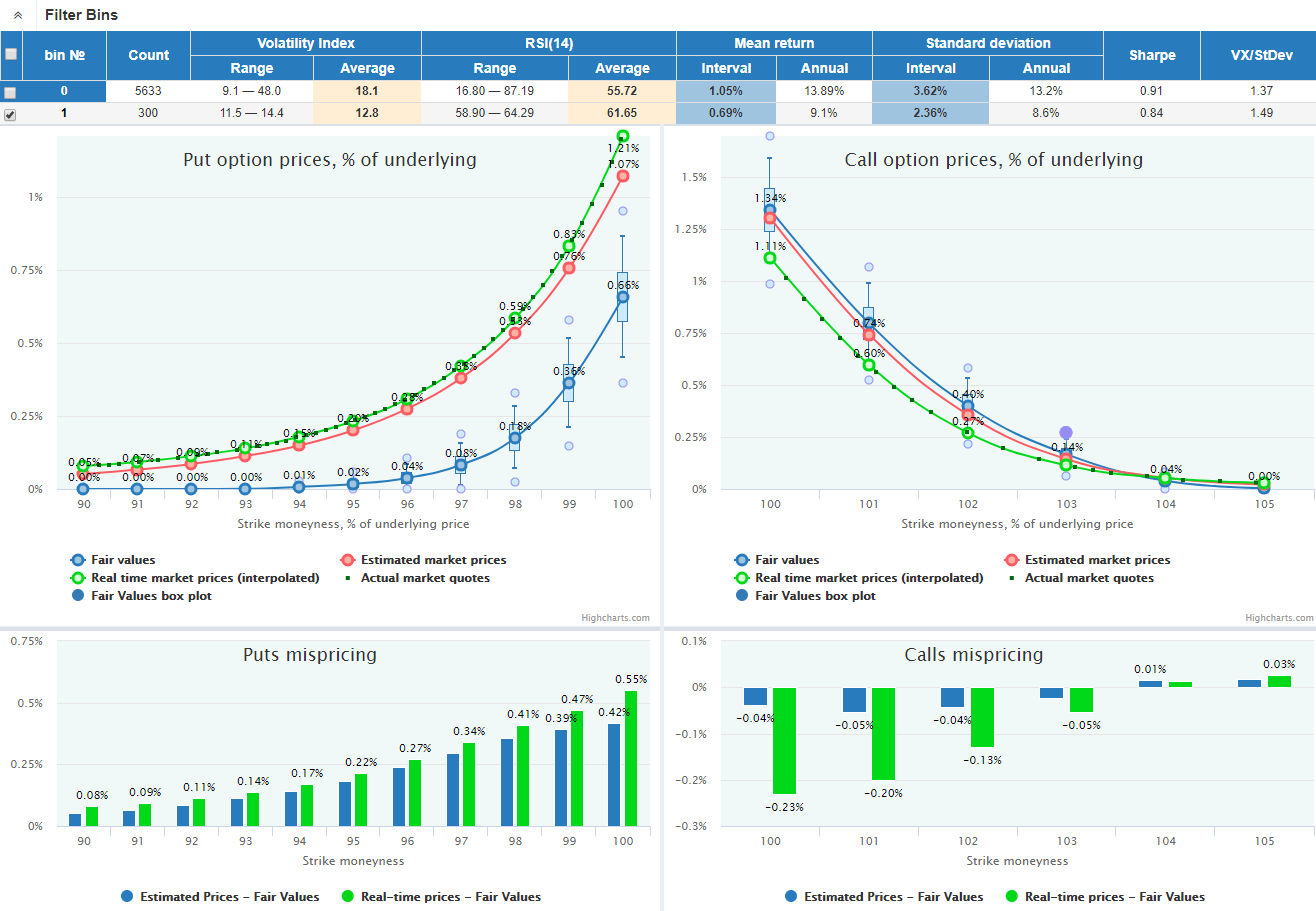 Puts are substantially overpriced; calls are underpriced. Market prices are adjusted for the June 15 dividend 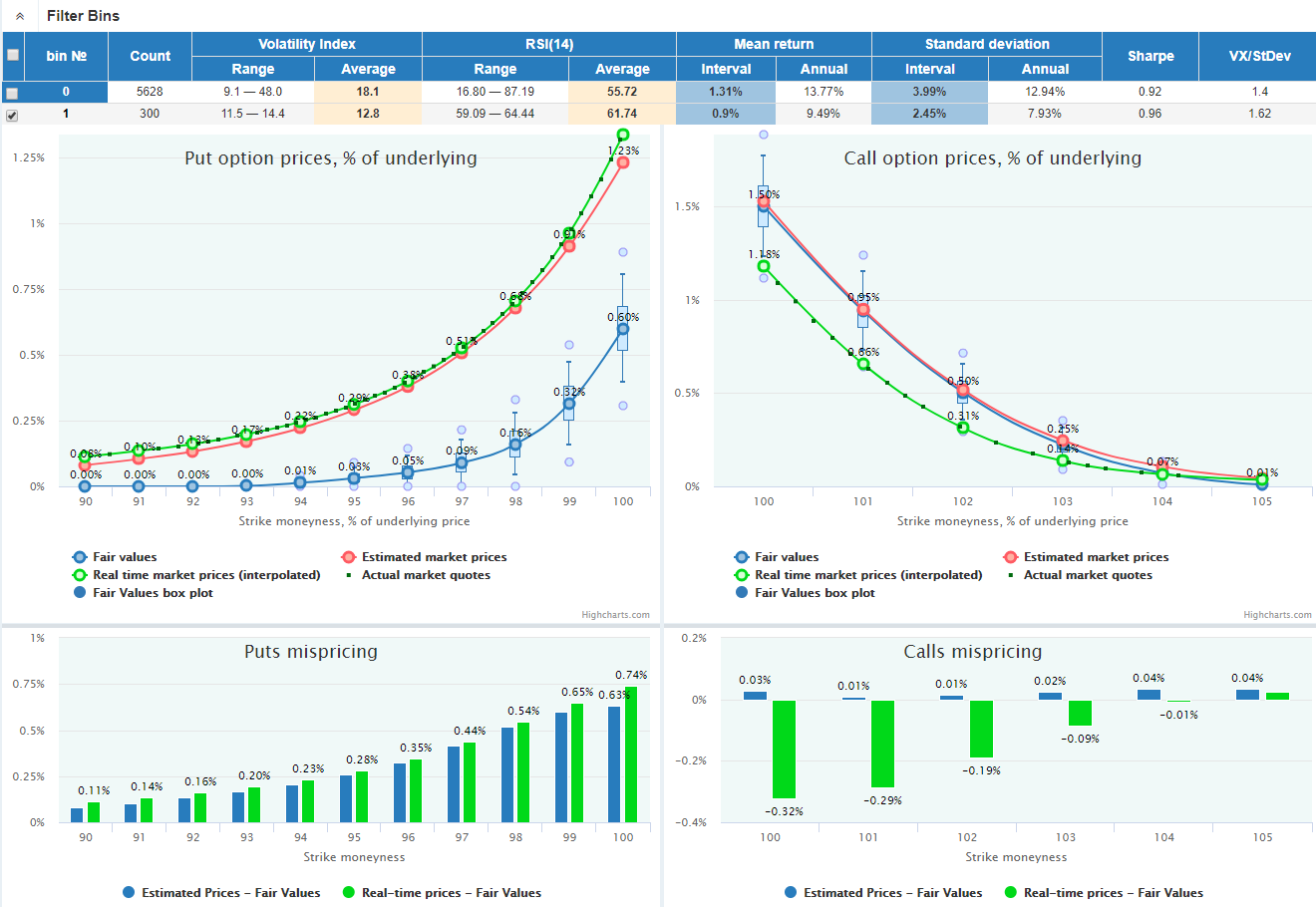 QQQ has also been staying within the narrow range near the local highs; RSI(14) shows slightly overbought conditions: 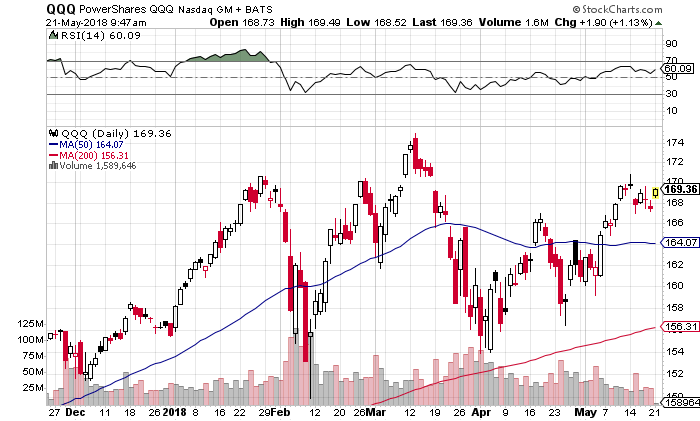 VXN has been staying at the lows since January this year:

Both puts and calls are priced fairly: 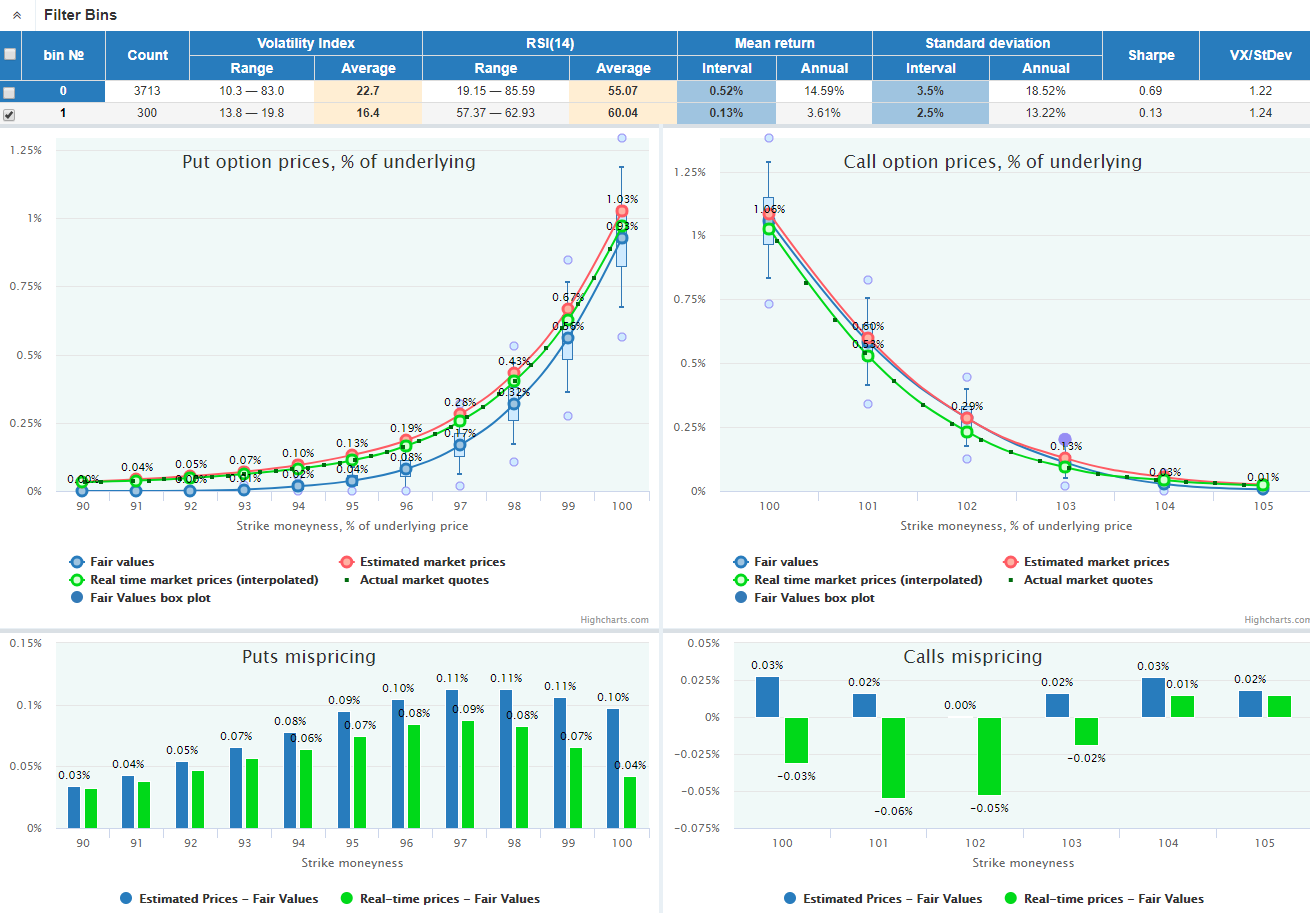 Both puts and calls are priced fairly: 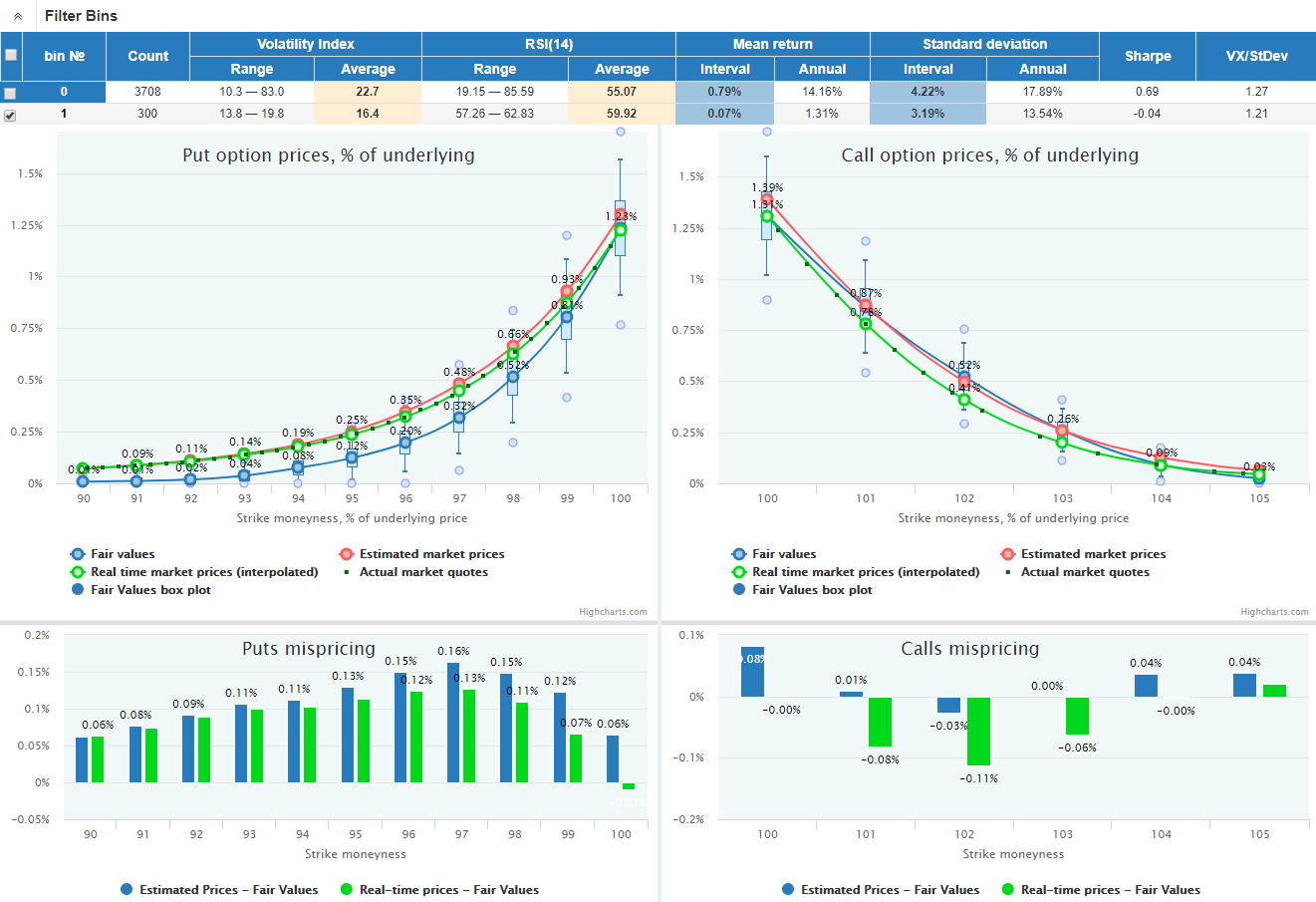 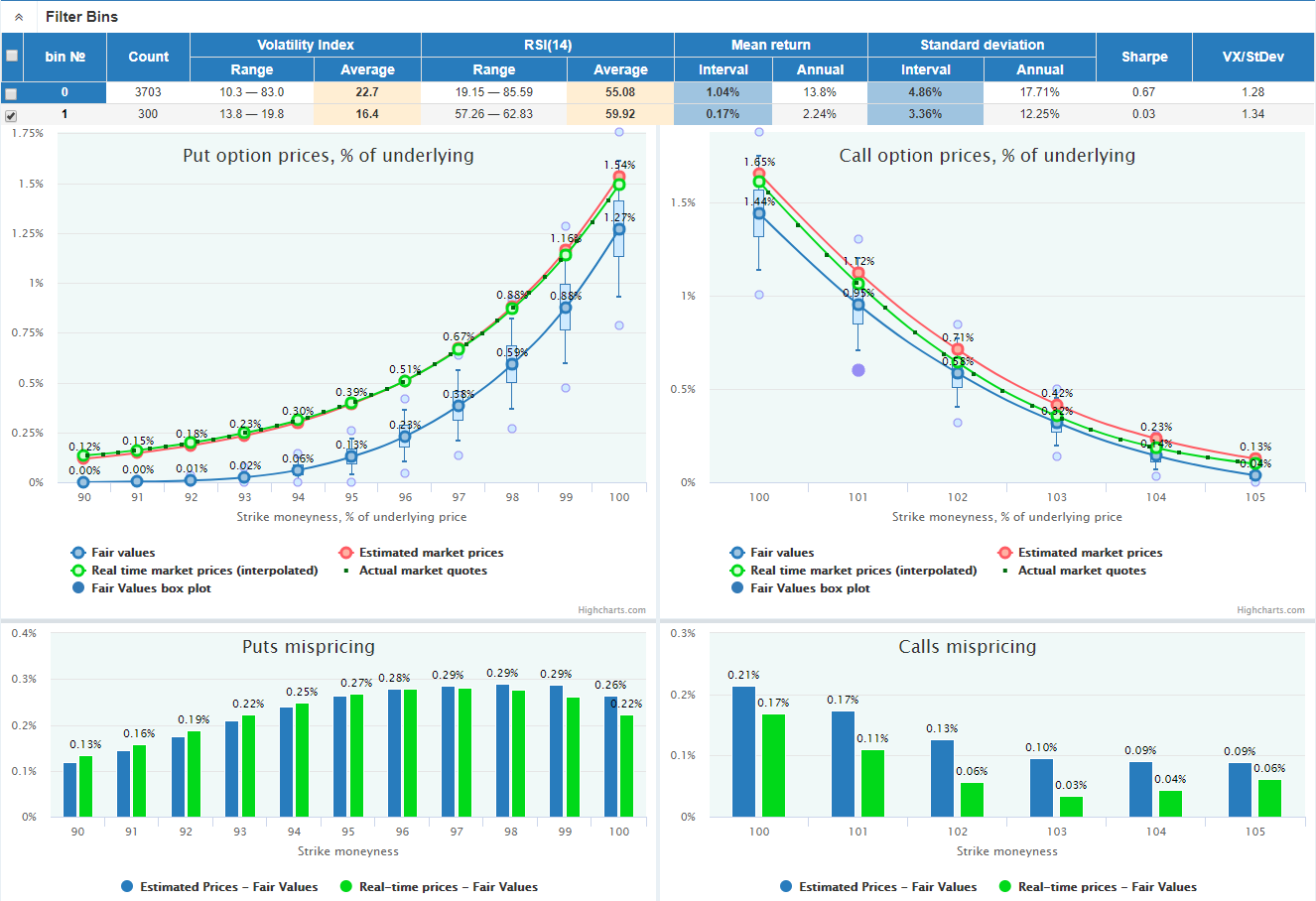 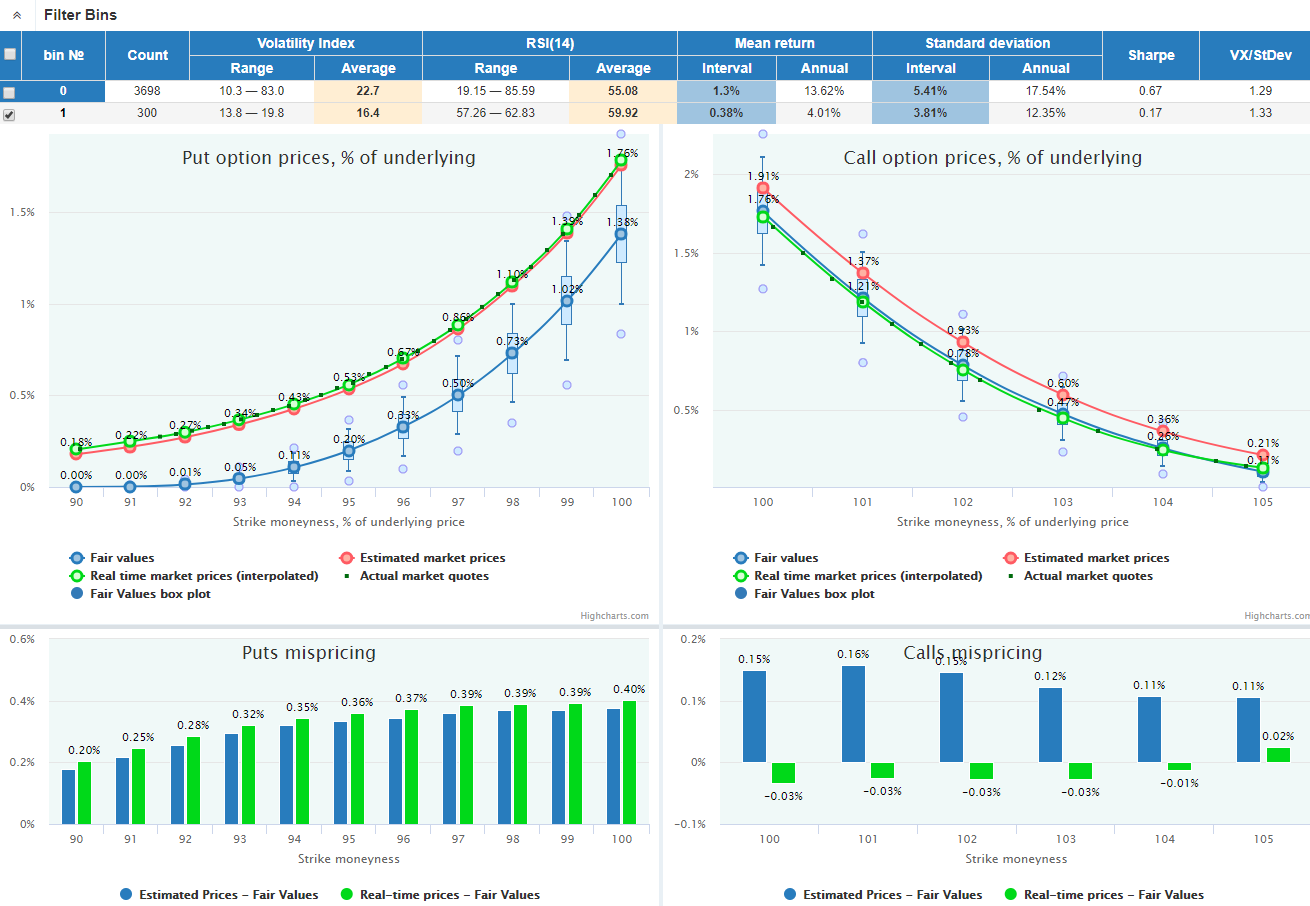 After the upward breakout, IWM has continued its way up posting its all-time high levels; RSI(14) has entered the overbought area: 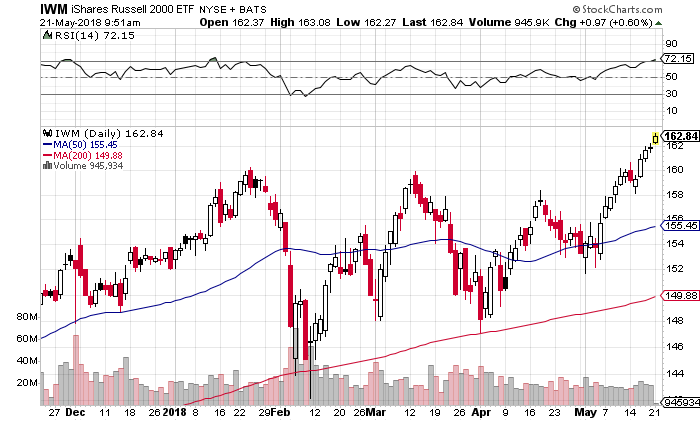 RVX has been staying near its lows since January: 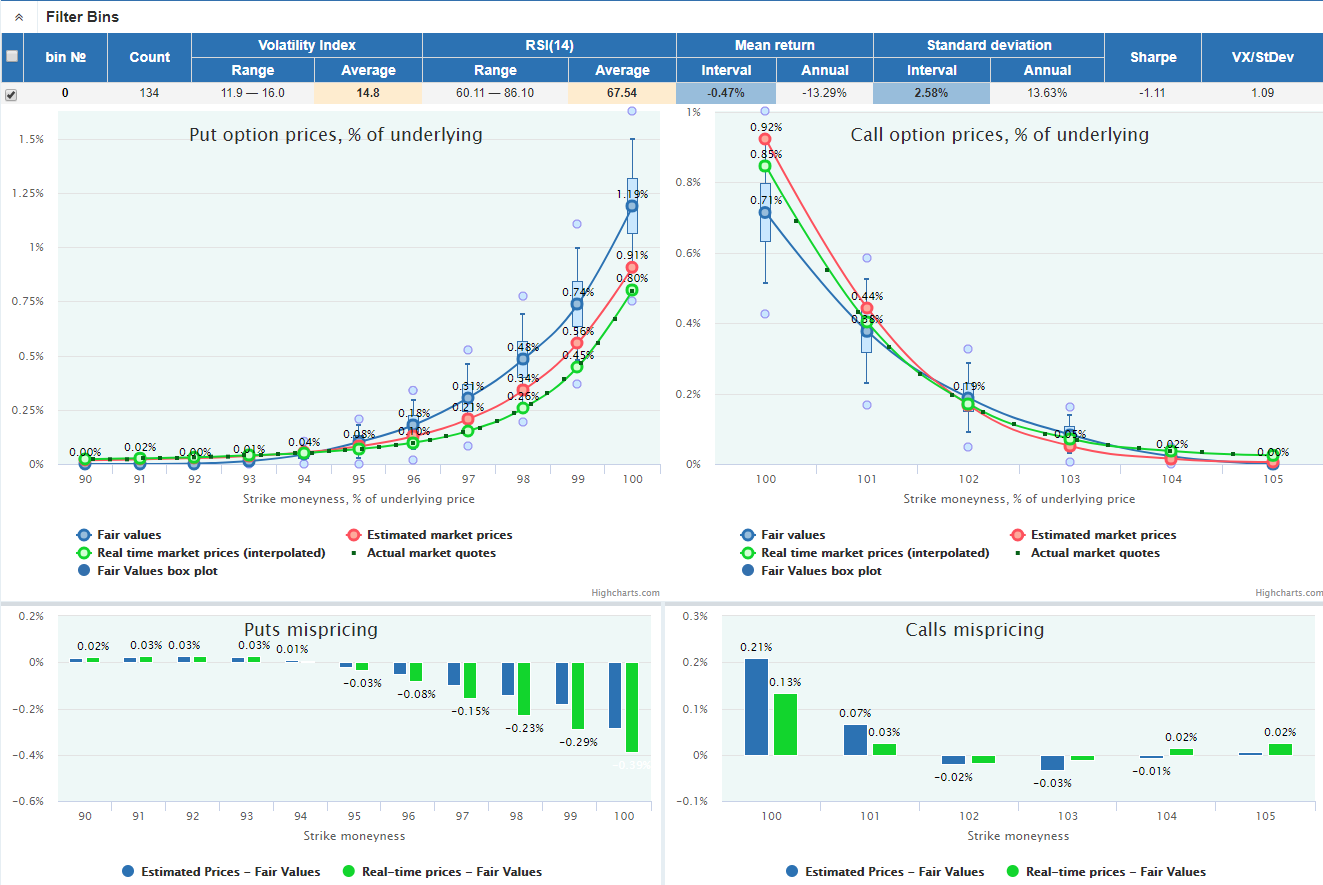 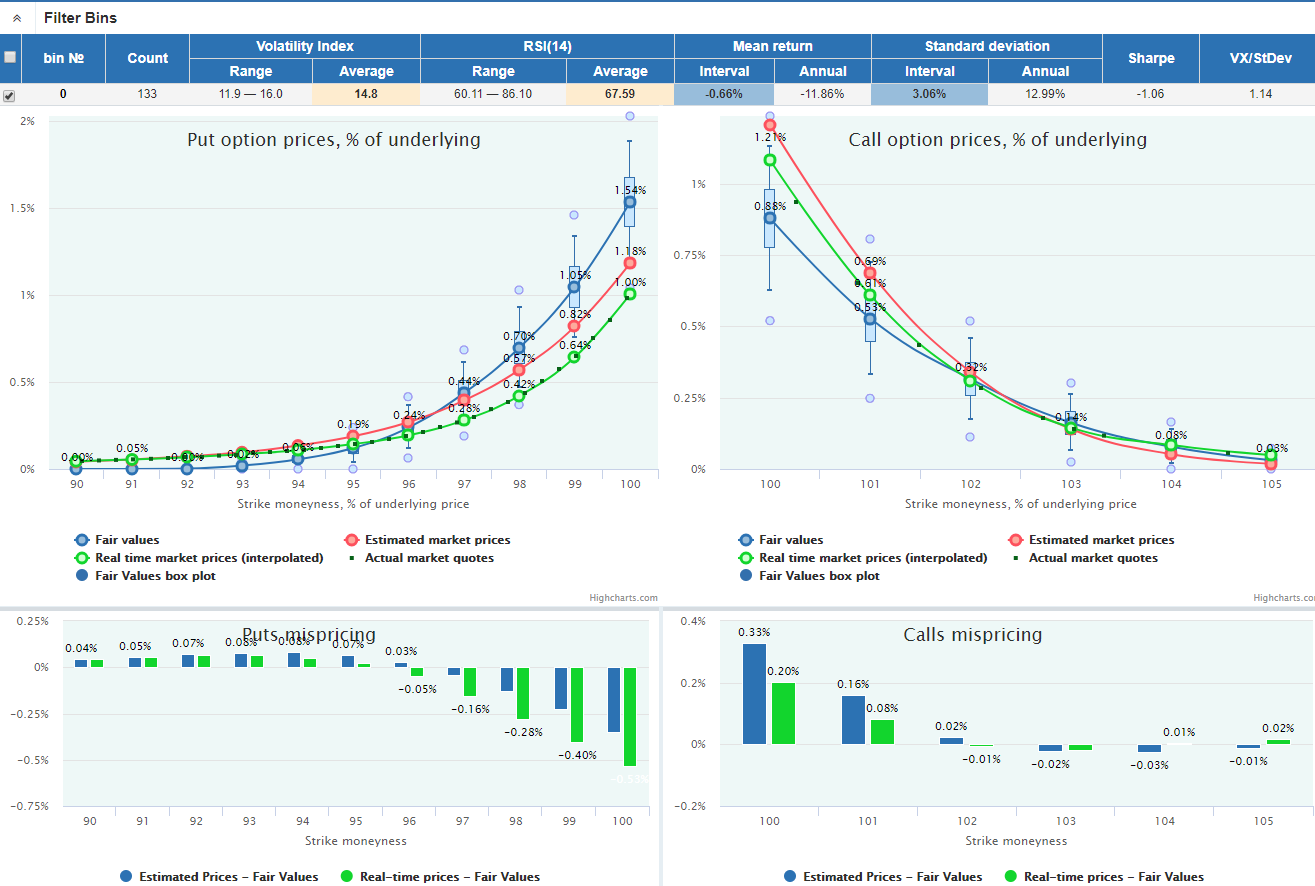 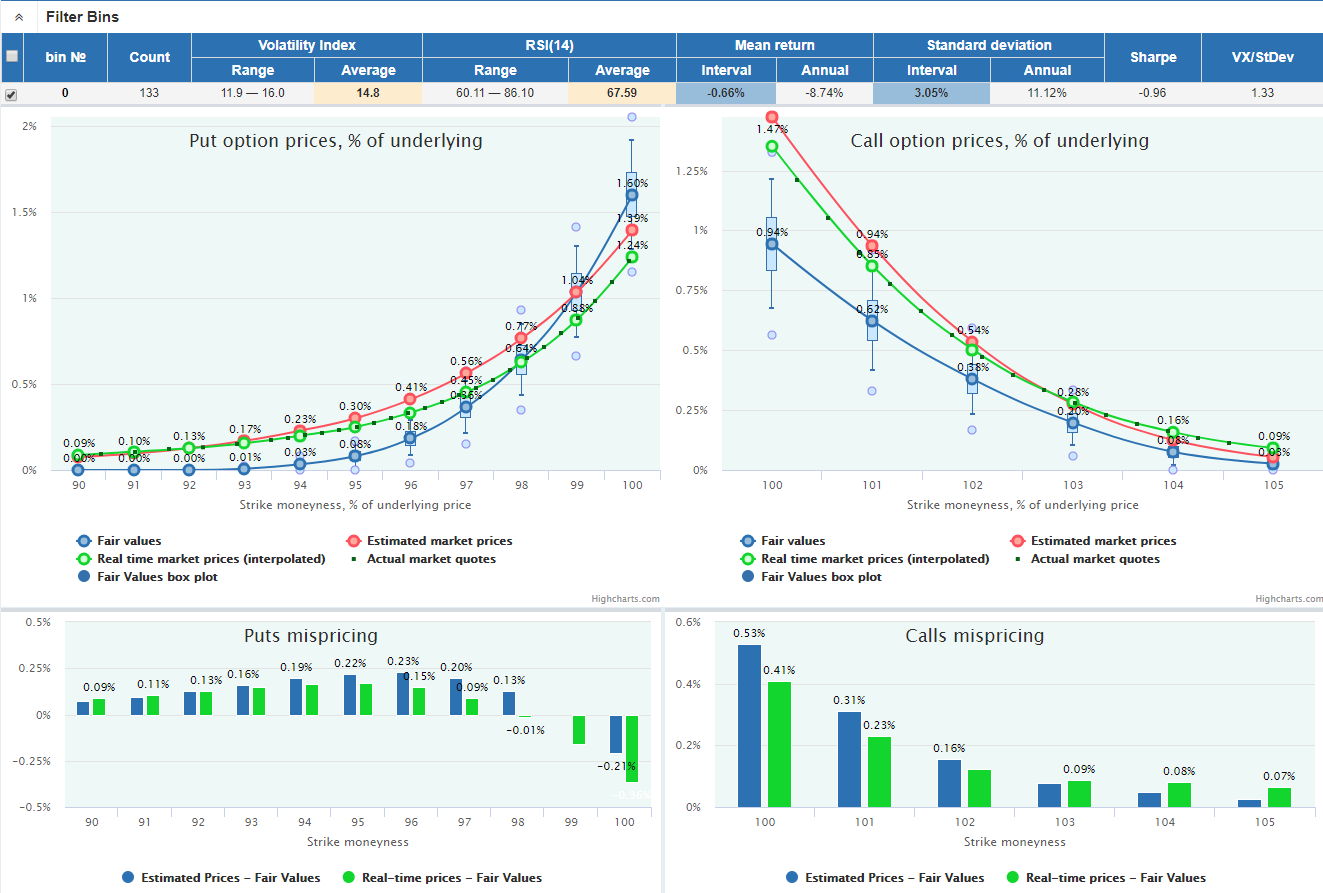 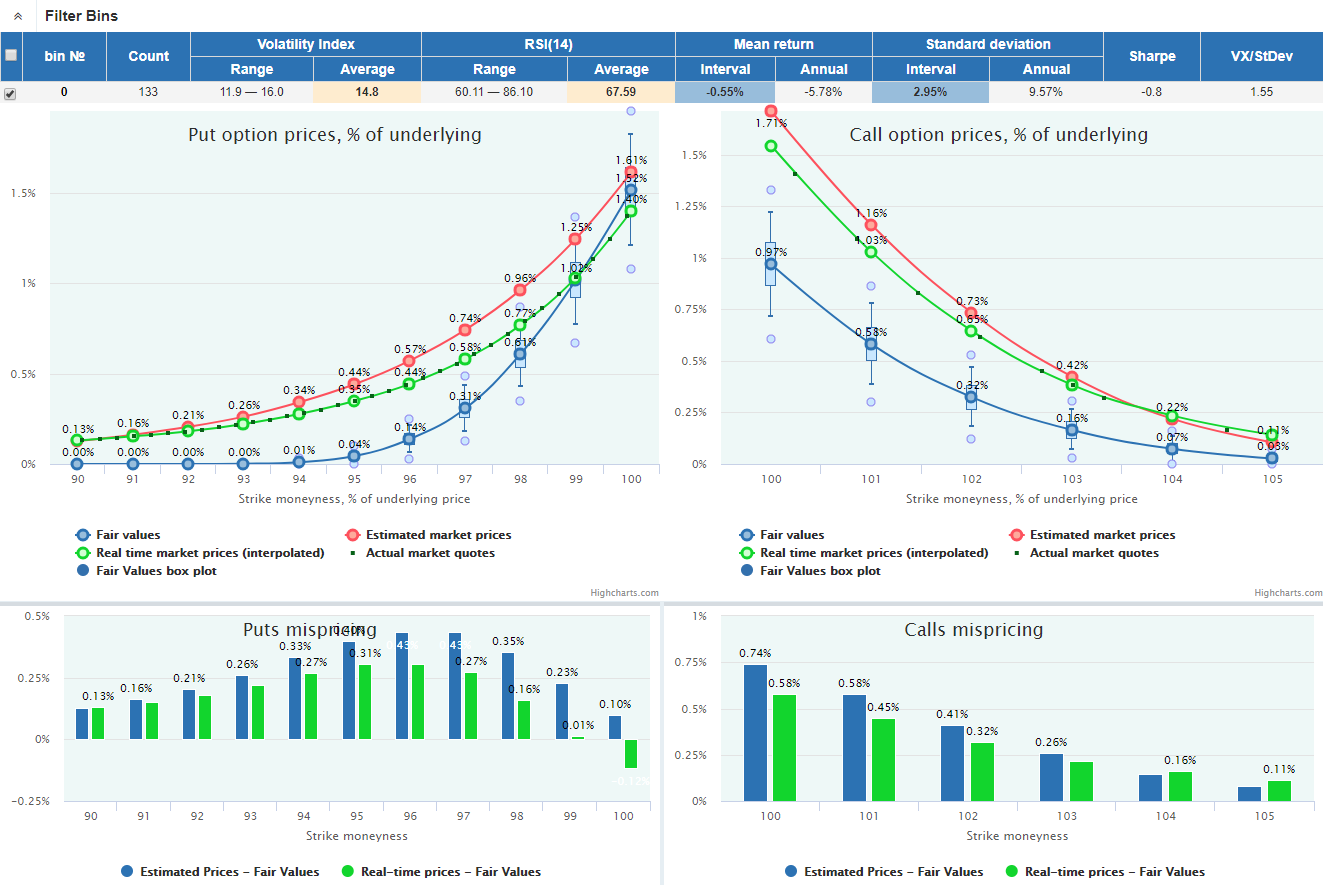 © Copyright 2017 OptionSmile. All rights reserved. Terms of Service and Privacy Policy.
The information provided on this Website is for informational purposes only and should not be considered as an investment advice. It is not intended to replace consultation with a qualified financial professional. Investing in options involves risk of potential loss exceeding the whole amount of money invested. No one should make any investment decision without first consulting his or her own financial advisor and conducting his or her own research and due diligence.